Bohemian Rhapsody fails to save

Bohemian Rhapsody fails to save

Hello!
I was ripping the UHD Version of Bohemian Rhapsody using Asus BC-12D2HT on MK 3.01 today end it ended with the following error, any ideas? 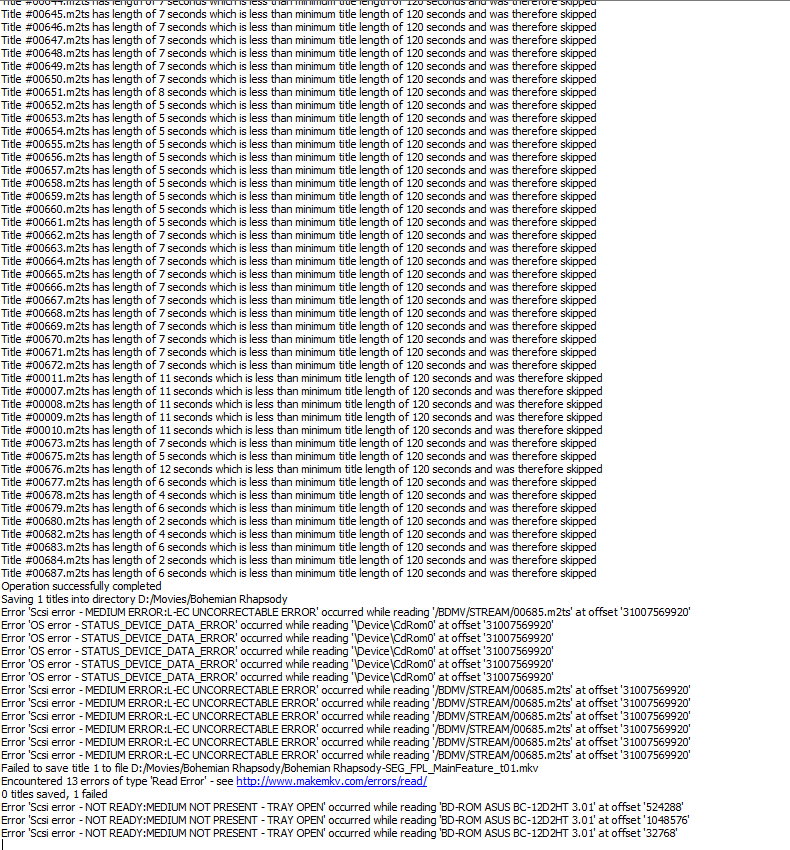 The drive encountered a part of the file being ripped that it could not read. While it was trying to read it, the operating system decided it was "off line".

First recommendation is cleaning the disk and trying again.
How to aid in finding the answer to your problem: https://www.makemkv.com/faq/item/8
Top

Woodstock wrote: ↑
Sun May 05, 2019 10:22 pm
The drive encountered a part of the file being ripped that it could not read. While it was trying to read it, the operating system decided it was "off line".

First recommendation is cleaning the disk and trying again.

Is there any way to run ignoring errors or error correction? The disk still runs perfectly on my Blu ray Player,,,
Top

No, MakeMKV does not have a "save even if corrupted" mode.

"Plays perfectly" is a relative term. A drive in a BD player allows a certain number of errors to be passed through, because the software will "smooth over" the glitches (or give a good try). The assumption for ripping, though, is you want a complete, accurate copy, just without the copy protection.
How to aid in finding the answer to your problem: https://www.makemkv.com/faq/item/8
Top

Bottom line to this Bohemian Rhapsody UHD is I finally ended up getting it ripped. BUT......I do not understand how it happened. Maybe someone could shed some light on it for me in case it happens again. I really just don't like not knowing.

The disc was purchased in Melbourne Australia, I attempted to rip it on the LG BU40N external I have. It would get about 2/3 in and just stop ripping. The read would drop to zero. I also noticed that Zero Bytes were in the finder window, yes, using a Mac. After 4 attempts I gave up this way.

So, I then went to File>>Backup and saved the entire disk to my SSD drive, that seemed to work fine. I then played the BDMV file via VLC and it played fine also from the backeu up file on my SSD drive.

Finally, I thought now that I have the full backup on the SSD, what if I now directed MakeMKV to the the SSD contents and make a .mkv file from that. Would it again fail, or would it rip.

Well, to my surprise, it ripped fine. So, I do not understand WHY it would work via this method, but NOT ripping directly from the drive. I have had no issues with several other UHD's ripped to date, just this one.

Any ideas from people way smarter than me when it comes to understanding ripping.
Top

For the sake of brevity I’ll try to keep this short. Long and detailed explanations can be found through a Google search as the technical aspects of this stuff can go on for days.

1. Ripping is to take the content of any disc (in this case a UHD BD movie) and place it in a container/format/structure outside the physical disc medium.

You ripped the FULL disc to your SSD and then created/placed some of its content into an .mkv container.

You can also rip it directly to an .mkv container (which I assume is what originally failed for you). In this instance, you are ripping and creating an .mkv container back to back. In which case you are executing TWO tasks at the same time through MakeMKV.

In your post you are using the “ripping” term somewhat incorrectly.

2. Because of many variables (e.g. physical disc imperfections from the manufacturing process, authoring issues, disc structures, protection schemes, drive issues/limitations, etc) executing the ripping directly from the physical media to an .mkv container can sometimes fail.

Once you rip the FULL disc first it can often be easier to manipulate the contents/data as you please as you are bypassing some of those imperfections/issues and MakeMKV may handle the FULL backup process a bit differently.
Top

In your post you are using the “ripping” term somewhat incorrectly.

In the end it seems like a lot of things computer related, sometimes they work, sometimes not. Appreciate the reply.
Top

Could someone please send me a fix for Bo Rhap as the 4K Ultra HD doesn't work on my Verbatim UltraHD 4K player.
Top

If it's a stand-alone BD player, no, you'd have to ask the manufacturer.
How to aid in finding the answer to your problem: https://www.makemkv.com/faq/item/8
Top
Post Reply
9 posts • Page 1 of 1